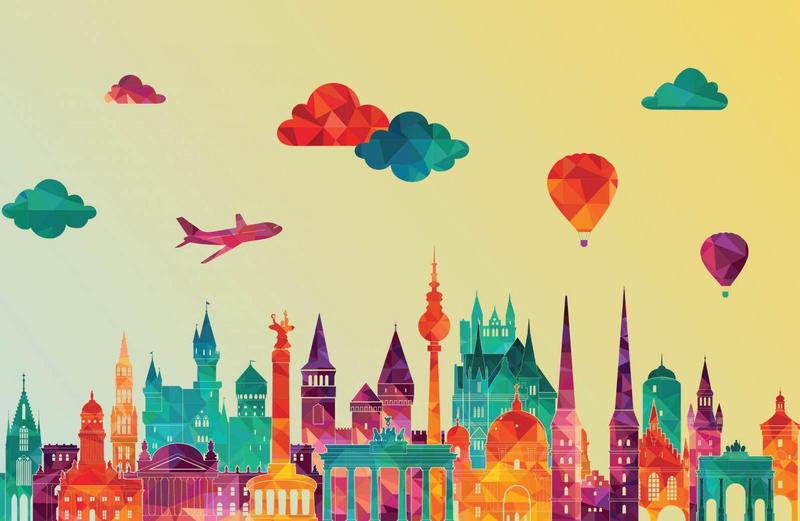 Travel Hotspots. Here you will find cities, tourist routes, historic and/or stunning sights worth seeing, celebrations and festivals to visit and take part, and recreation from spas to skiing.

A Link to Germany´s Scenic Routes

Germany has many scenic and historic roads and routes, ranging from the famous ´Romantic Road´, ´Clock Route´ and ´Stork Route´ to walking in the footsteps of former Pope Benedict, and here are some for you to enjoy.

A Link to Germany´s Seasonal Attractions

Throughout the year there is always one event or another taking place somewhere in Germany, that is based on generations of history and tradition. From Christmas to May Day they could be something to plan a visit around.

A Link to Historical Sites, from Castles and Cathedrals to Monuments

From prehistory to present day Germany, there are endless physical witnesses to Germany´s past, from prehistoric solar observatories to cathedrals which took centuries to build.

A symbol of spring, ‘Spargelzeit’, is the white asparagus season in Germany. There are ´Asparagus Routes´, ´Asparagus Towns´ and even ´Asparagus Museums´. And for just a few weeks there is ´Asparagus without end´ to eat. The much loved white stalks known as ‘The Royal Vegetable or ‘Das Koenigliche Gemuese’, are harvested and enjoyed for two months from around the middle of April until June 24th, St. John the Baptist’s feast day.

Enjoying winter months is a way of life in Bavaria. Breathtaking mountain scenery, snow covered forests, castles, palaces, abbeys and ski slopes, mix with culture, shopping streets and a regional cuisine that keeps the cold out and warmth in.

Cologne´s Imhoff-Schokoladenmuseum, the world´s largest and most comprehensive chocolate museum. A futuristic building, designed as a boat moored alongside the River Rhine, it is an inter-active museum covering 3,000 years of chocolate history, and the life of chocolate from cocoa bean to bar, rabbit or egg. With a short video.

East Germany began to build a wall across Berlin on August 13th 1961, and freedom of movement and choice was taken away from millions. In November 1989 the GDR government issued a decree that the exits were to be opened, and families who had been separated for decades were reunited. During its existence the Berlin Wall had defined the cold war, and the division of Europe, now not much of it exists. But there are walking and cycling paths that follow the route, as well as museums, memo

The Potato Museum and The Medieval Crime Museum are two of many unusual museums in Germany's huge, and comprehensive, museum collection, covering everything from classical antiquities and priceless treasures, chocolate, ships and composers Bach through Wagner, to Zeppelins.

The German Wine route through a patchwork of age old vineyards is a fascinating experience. The scenery is stunning, while wine from the different areas can be tasted everywhere from monasteries and castles to that produced by the vines planted in fields belonging to the village pub. Traditions and customs surrounding the harvest remain, but more emphasis is being placed on the grapes and wines created, so sweet and tasteless Liebfraumilch is on the way out, replaced by wines more compatable

Germany and its Beach Basket Culture

A cult object these days, but the first Strandkorb was invented in 1882, so an elderly aristocrat with rheumatism could continue to enjoy her beach holidays. Safely protected from the cold winds, rain, and sandblasts of the bracing North, where Germany borders the North and Baltic Seas.

It wouldn't be summer in Germany without a cold beer enjoyed under a leafy chestnut tree in a beer garden. Originally a way of using shaded areas covering underground beer storage cellars in 19th century Bavaria, visits to a Biergärten soon became a popular pastime.

It began over 250 years ago...trees planted to help travelers find their way. Germany's Avenues Route, the tree lined Deutsche Alleenstrasse, a journey through nature and history down shaded tunnels formed by ancient trees, witnesses of travelers from oxen carts to the present day.

Ever since the Romans swept in with their Asparagus, Chestnuts and Baths, the German speaking lands have been a playground, not just a battlefield. And the "Theme Routes" crisscrossing the country show its amazing legacy from nature and history, and its diversity from wine and cheese to asparagus.

For generations a wicker beach chair, the ´Strandkorb´, once likened to an upright wash basket, has not only sheltered beach goers from wind, rain and too much sun it has become a part of Germany´s culture. A symbol for holidays, sand, sea and just the right amount of sunshine.

It has been held for over 80 years, but the annual food, agriculture and horticulture fair held each January in Berlin has kept in step with the times. Now Germany´s enthusiasm for the environment, ecology and ´green´ food, organic products, is mirrored in Berlin´s ´International Green Week´. The food halls alone, with hundreds of different varieties of worldwide specialties on offer to try, are worth a trip to the exhibition if you happen to find yourself in Berlin during a January winter.

It began as a horse race in honor of a royal wedding, in fields outside Munich. More than 200 years later those fields are part of Munich, but Oktoberfest, the world's largest Volksfest, is still a festival of Bavarian exuberance, draft beer, food and tradition.

It´s "Oktoberfest" although most of it takes place in September, an "Angel" on hiatus from heaven attends every year, one Mayor opened it by shouting "I´zapt os" instead of "O´zapft is", (it´s tapped), and that was before any beer was consumed. Some Oktoberfest Fun Facts.

Fruehling, Spring in Germany. It might be windy, even cold, but tables and chairs appear outside Cafe's and Beer Gardens, Festivals, Cultural Events, Flowers, outdoor Sports and age old springtime traditions take over the country. All it needs are those first signs of Spring.

The Rhine In Flames

Rhein in Flammen is a unique and spectacular annual "Fire, Water, Light and Culture Festival". Beginning in May, and continuing for five Spring, Summer and Autumn days along a beautiful, historic stretch of Germany's Rhine River. And each display has its own theme.

The Potato Museum and The Medieval Crime Museum are two of many unusual museums that join Germany’s huge and comprehensive museum collection, which covers everything from classical antiquities and priceless treasures, chocolate, ships and composers Bach and Beethoven to Zeppelins